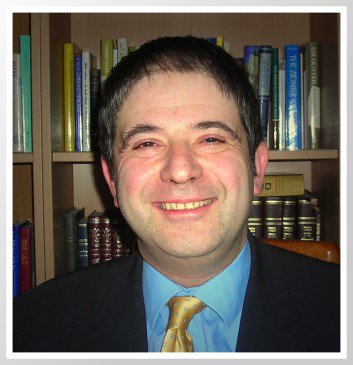 Rabbi Dr Michael Harris was born in London in 1964. He studied at three yeshivot in Israel: Ma’ale Adumim, Machon Harry Fischel and Yeshivat HaMivtar in Efrat. He holds semicha (rabbinic ordination) from the Chief Rabbinate of Israel and from other prominent Israeli rabbis.

Rabbi Harris became Rabbi of the Hampstead Synagogue in 1995, having previously served as Rabbi of the Southend and Westcliff Hebrew Congregation for three years. His first full-time communal position was as Education Officer of the Union of Jewish Students in 1986-87.

Rabbi Harris is a regular speaker at the annual Limmud Conference and has lectured in many synagogues and other venues within the UK Jewish community.

He has published articles in scholarly journals including the Harvard Theological Review and the Torah U-Madda Journal, as well as articles in newspapers including the Guardian and the Jewish Chronicle. Rabbi Harris has taught on BA and MA programmes at King’s College, London, and is currently an Affiliated Lecturer in the Faculty of Divinity, University of Cambridge and a Research Fellow at the London School of Jewish Studies (LSJS).

When unable to find sufficient aggravation within the Anglo-Jewish community, Rabbi Harris seeks it in his capacity as a proud, card-carrying member of Chelsea Football Club.